We've been working on this house. All the floors had carpet. Most of the floors were covering hardwood, which merely required pulling and staple removal. The family room was a different story. The family room had carpet, but under the carpet was a layer of nasty 1960's linoleum  GLUED TO THE HARDWOOD. This first video is a time lapse of Lucy taking her turn chipping away at the top layer.
Then, Becky steamed off the gluey paper layer while wearing a gas mask, saving the work for while the rest of us were at work/school so as not to give us all mesothelioma.

We didn't get a video of the sanding that took place next, but it necessitated a very large and powerful machine and produced about a full trash can full of sawdust. The staining took about 20 minutes.  Becky did the polyurethane, again to keep the rest of our lungs safe, which then required a couple nights at a hotel or grandma's house. 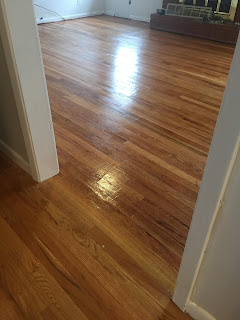 Suck on that, Betty Foster.
Posted by jon at 5:20 AM No comments: 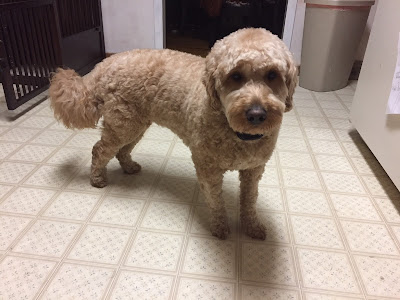 Jack is not our dog. Jack is staying with us for a week while his owners go somewhere more fun.
Jack is a good dog. Jack is an abnormally good dog. Jack is a brainwashed, neurotic, robot-like, good dog.
Jack does not get on the furniture. Jack does not beg for human food. Jack can sit, lay down, stay, spin, shake, stand, "kennel," and probably do taxes.
At his house, Jack rings a bell that hangs on the door when he needs to urinate and/or defecate. His owners then open the door and Jack goes to his cordoned area in which he does his business.
And herein lies the problem.
Jack does not have his special poo-area when he is staying at the Tolman house. Jack's brain has been so well trained that he unable to relieve himself now that he is away from his routine. Instead, Jack nervously whines all night long with his dog butt full of poo, unable to do the deed when he's out in the yard being walked around by a Tolman in his pajama pants at 2 am.
You apparently cannot remove all of the annoying things that dogs do, and still expect the dog to function as a dog.
Posted by jon at 2:41 PM 2 comments:

Well, it's been a while. That Facebook thing really sucked us in. I'm going to go back to this for a time. Posts on here will probably not be daily, but weekly perhaps? It's strange to take a step back from social media. I have no doubt that I'll get sucked back in, but for now, I'm taking a break from political "discussions," memes about Mondays, and quizzes about which Harry Potter actor I would be if I lived in Florida.

Here are some things:
I want these things. There are four of them at work. They are promotional mugs from the makers of Actos, a drug that reduces insulin resistance that hardly anyone uses anymore. There are three more, the liver, the kidney and the muscle. These, left to right, are the pancreas, triglycerides, the stomach, and HDL cholesterol. I don't know why I want them, but I'm oddly tempted to spend the 40 bucks on ebay that it would take to complete the set. 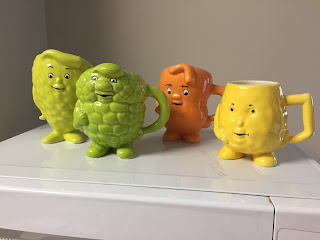 These are/were spiky balls from our "sweet gumball tree" in our back yard. We spent a good portion of Thursday sending about a million of them back to the hell from which they came. 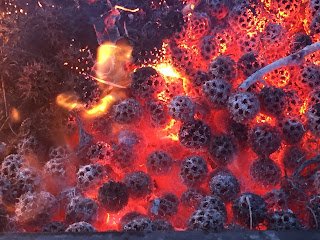 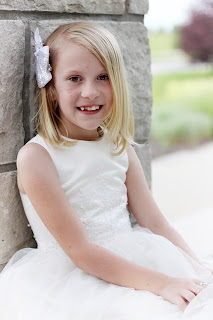 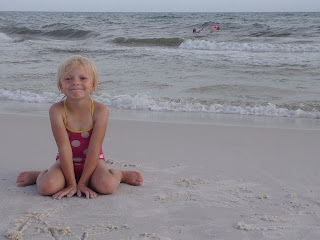 Then we went to FLORIDA! 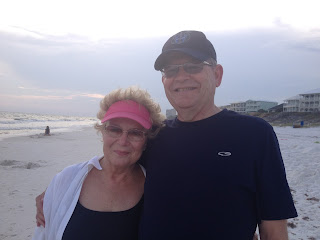 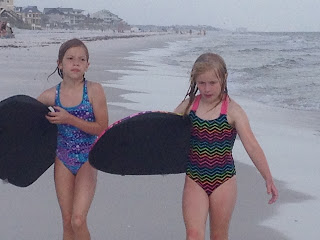 
We're attempting to limit television and IPad use on Sundays. I asked the girls what they wanted to do and they said, "Make a leaf pile!!" This is not something that I would have chosen as a child. This is chores. However, it is somewhat difficult to argue with three little blonde pixies begging to do yardwork. 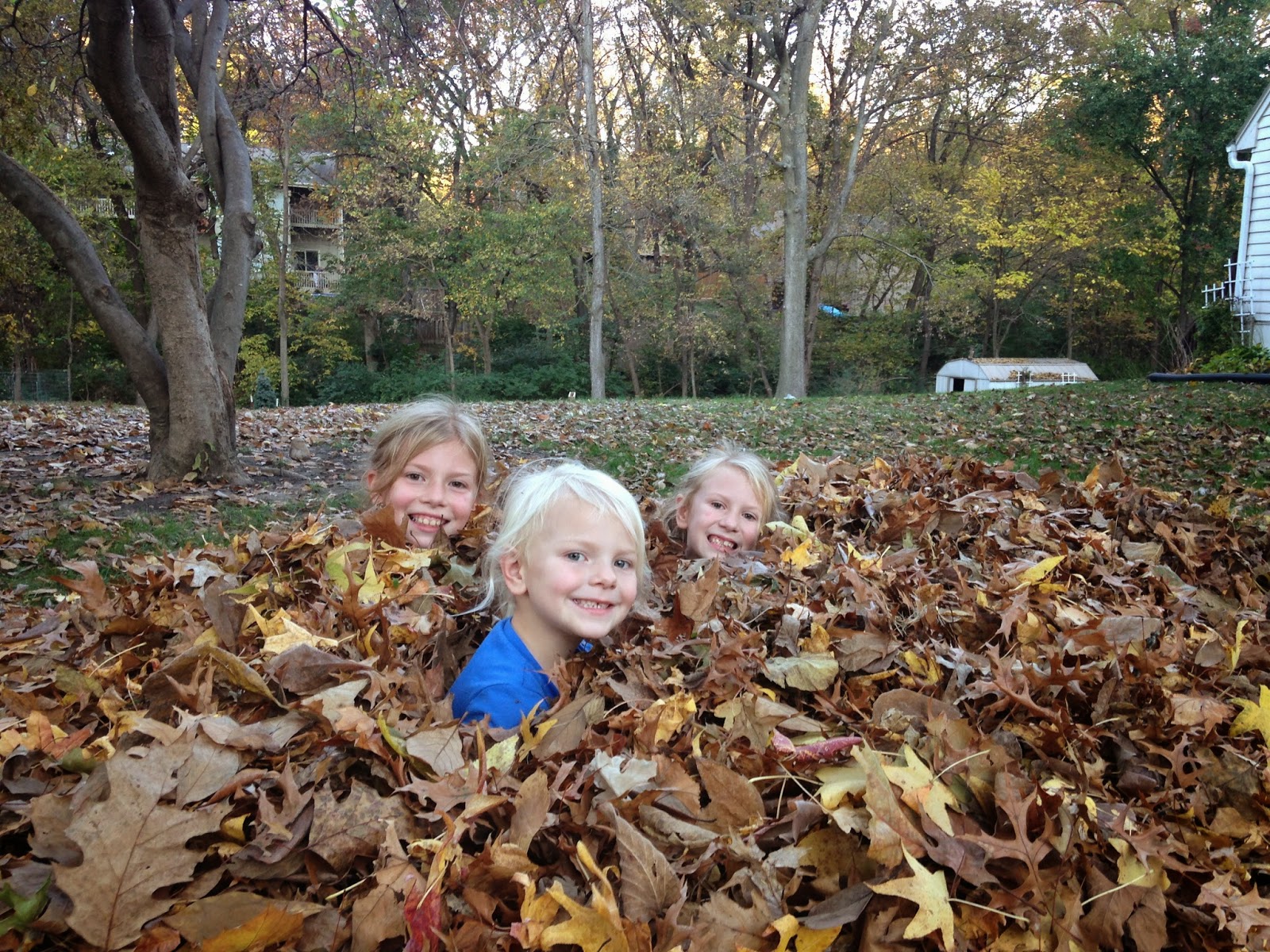 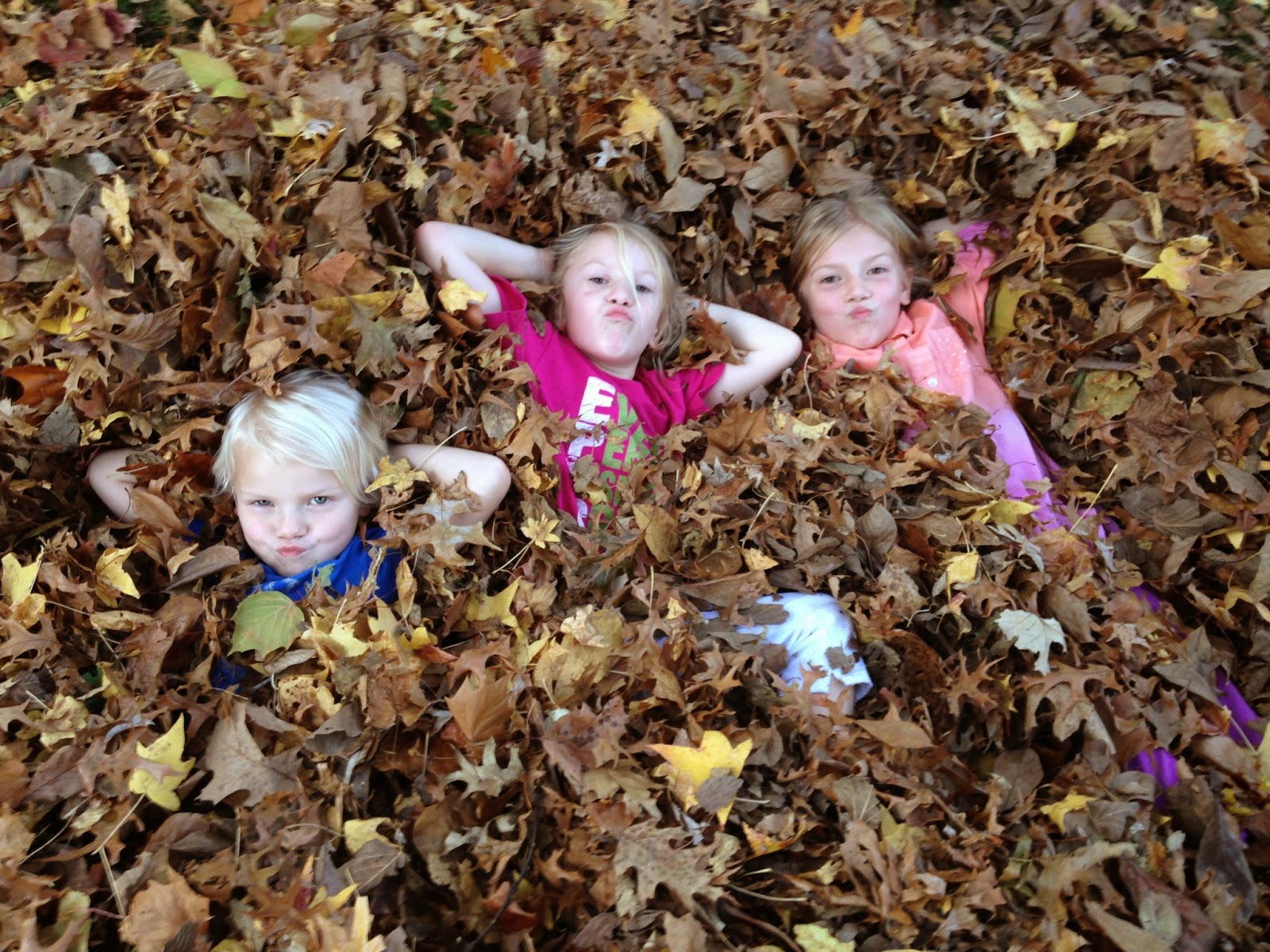 We got a fair amount raked up. 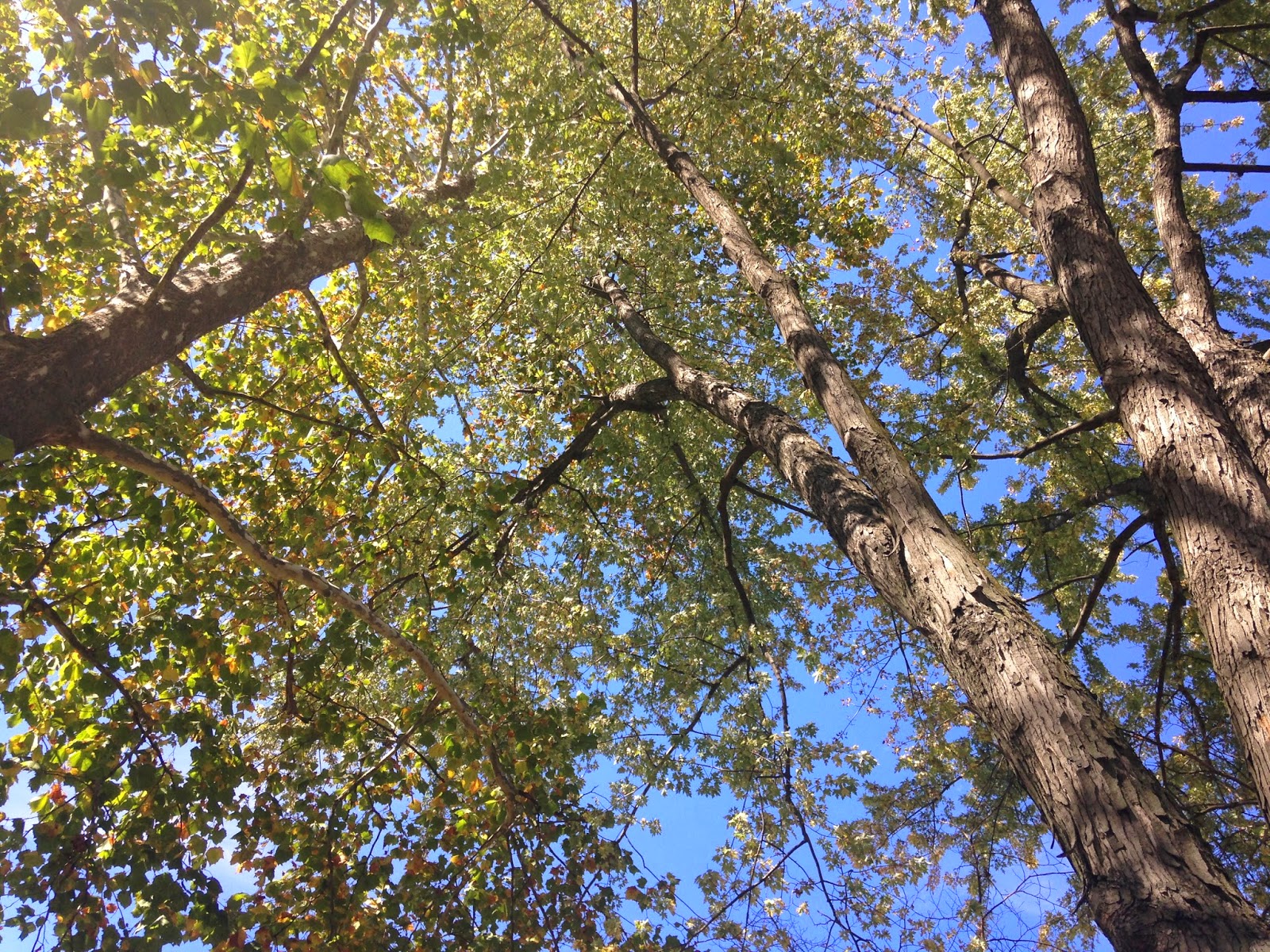 There are only a few left to fall. 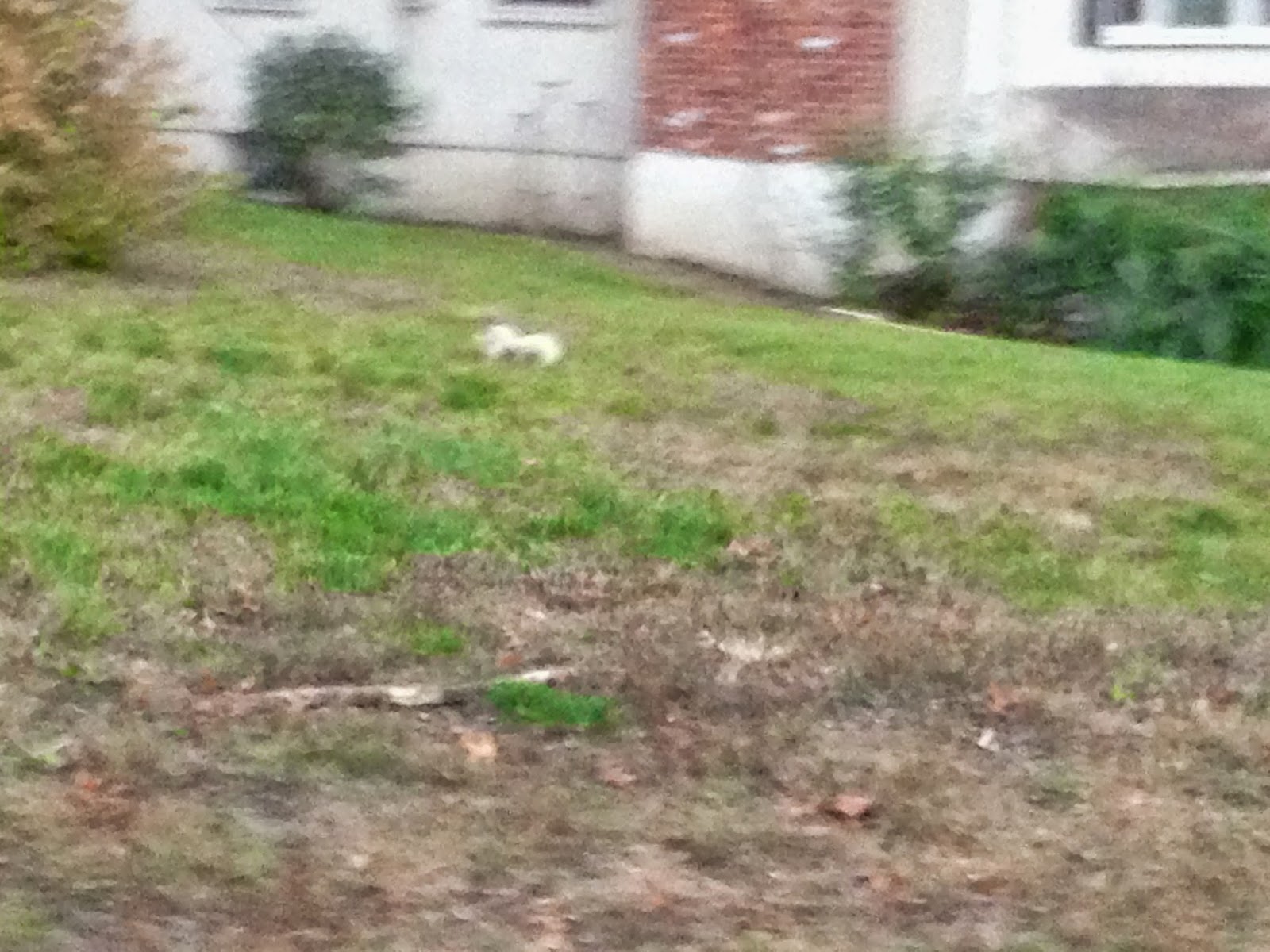 I swear to St. Ignatius: this is an albino squirrel we spotted down the street.
Posted by jon at 5:27 AM 16 comments:

My goodness, it's been a while. It's unfortunate that facebook and instagram have pushed blogging into antiquity. It's been almost a year since I posted anything here, though my Face Book is regularly faced. To recap the year:
﻿ 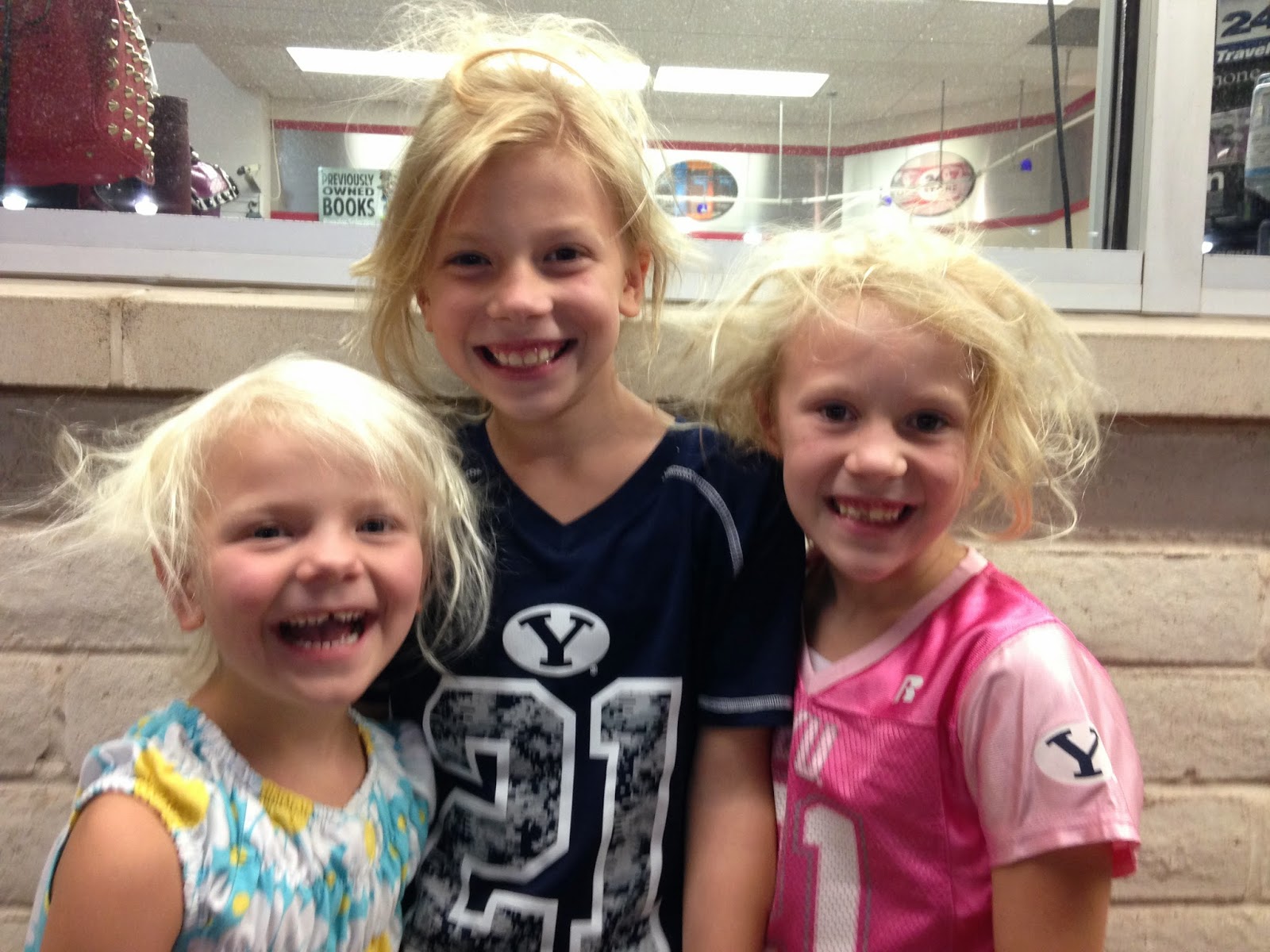 These three hooligans had a summer, then they started at Liberty's new charter school, EPIC, which stands for Even Poop Is Cool. It's a slogan meant to reduce bullying, because if poop is cool, so is the smelly kid that doesn't know the names of the boys in One Direction. 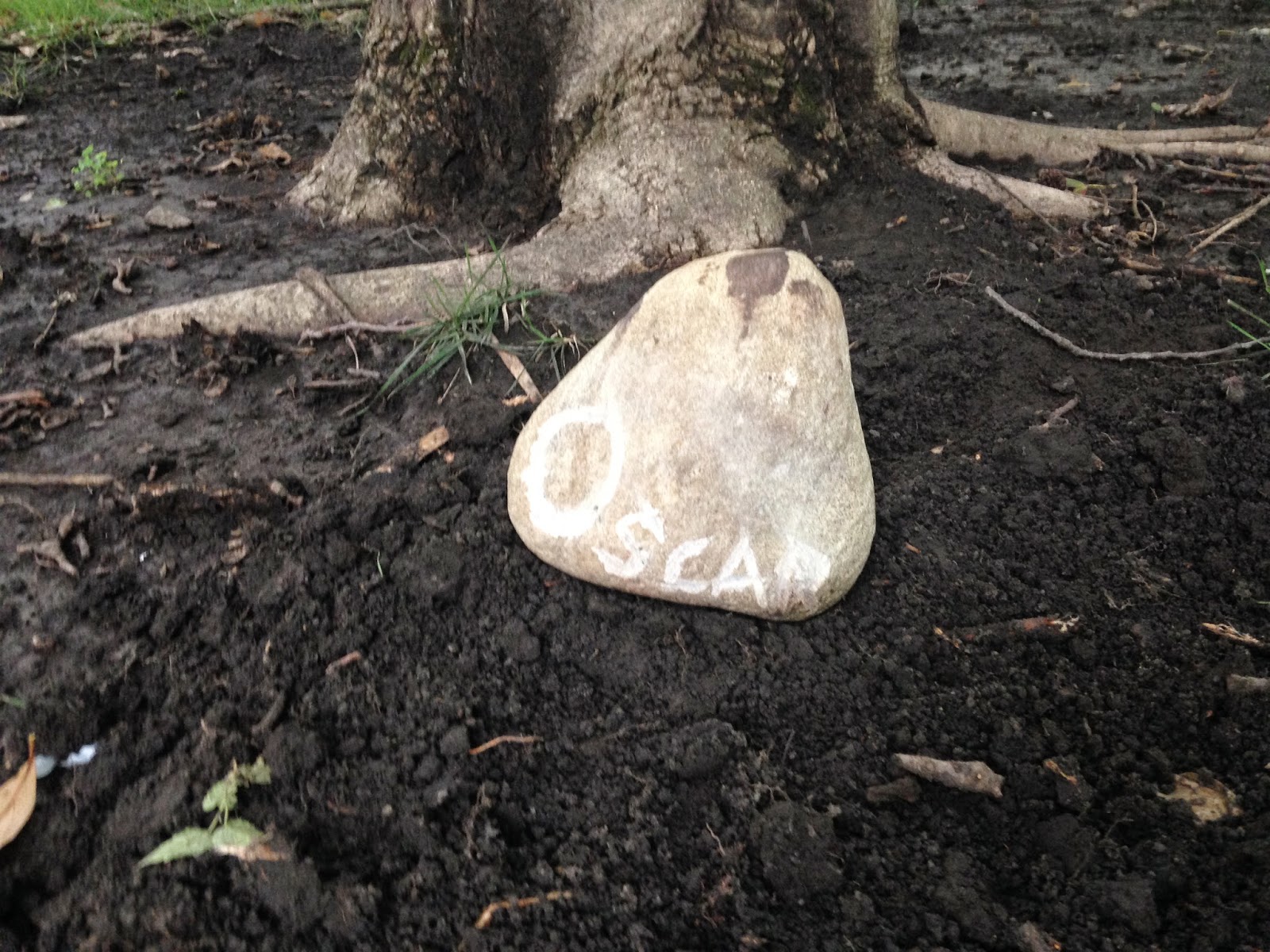 We took another couple stabs at dog ownership. We first tried purchasing a very cute Doxie-poo puppy that weighed less than a meal at Chili's. It apparently came with a faulty liver because after several non-free trips to the vet, it went off to wherever dead dogs go. Oh, wait. There was a movie that explained everything. After Oscar's passing, we tried to repair the hole in our daughter's hearts by getting a rambunctious labrador/german shepherd mix that bit people and peed in the same spot in the crack between our tile and hardwood floors about 900 times. So we gave him back. 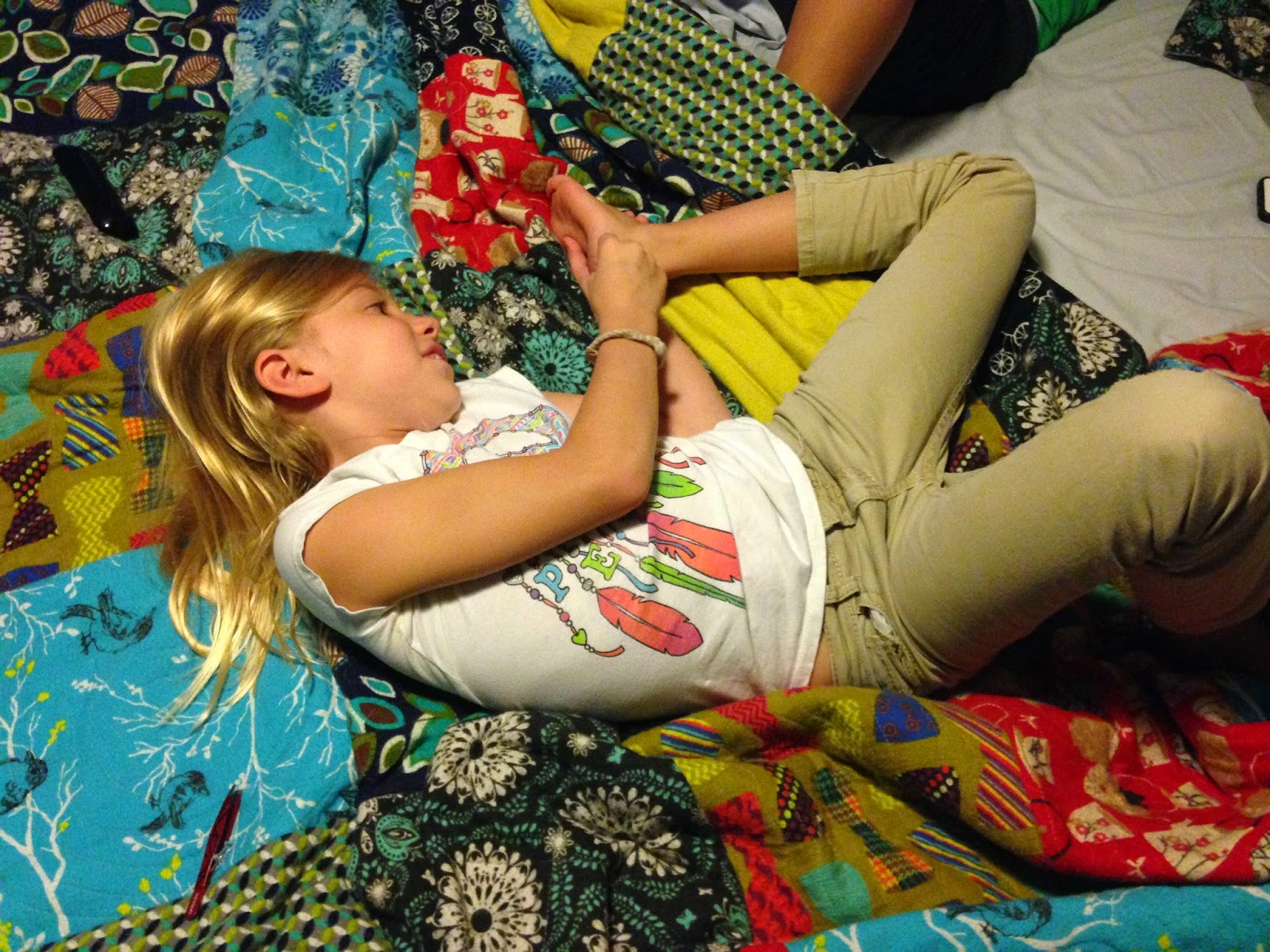 Sam got a splinter in her foot.

Jon stopped teaching for a while and started rolling balls of dung with his hind legs. 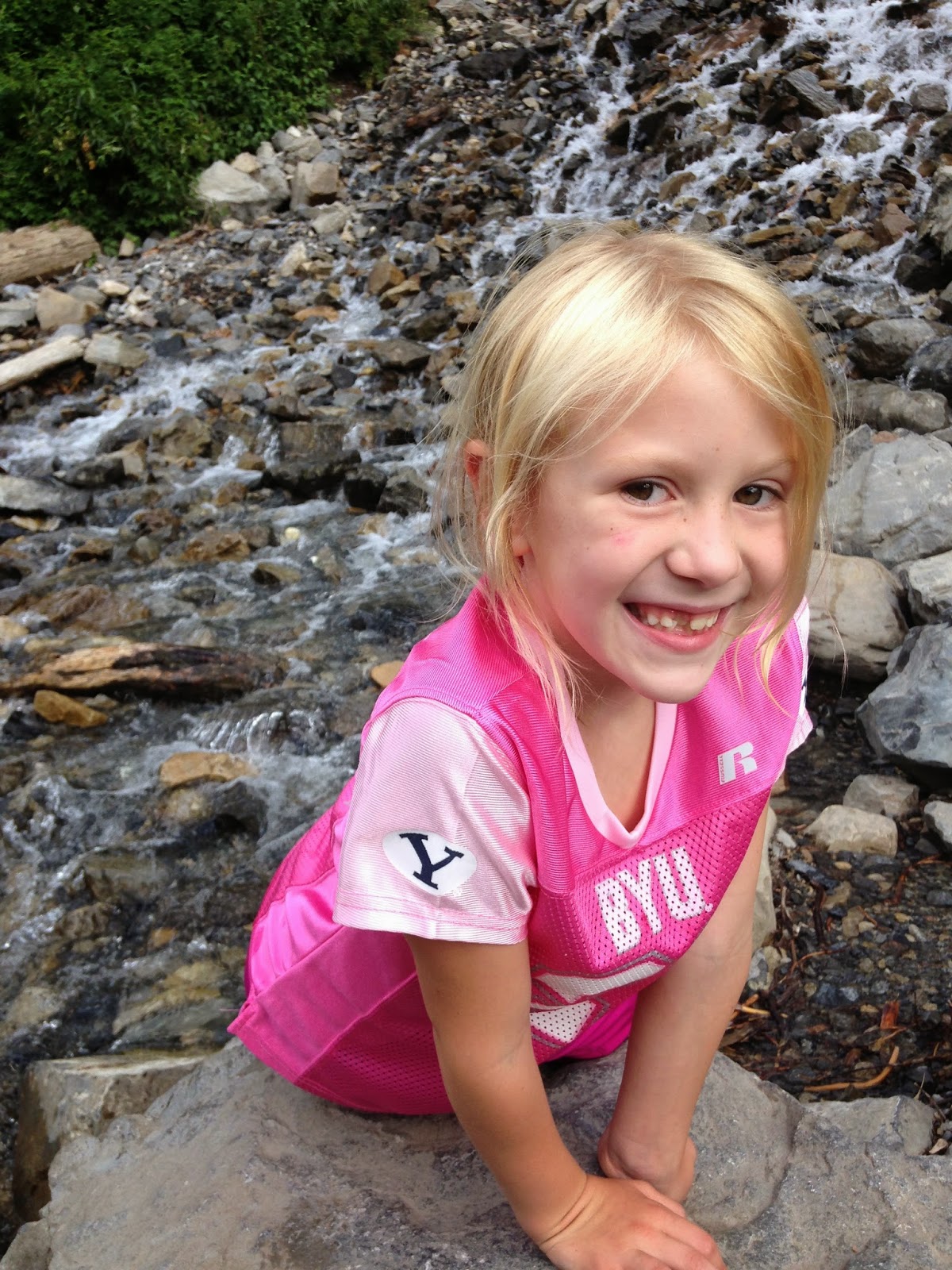 Lucy enjoyed our trip to Utah, in which we attended Jon's grandmother's funeral and presented the girls with the University they'll be attending in about 10 years.
Nora is now in Kindergarten and reading, but reading is not as good as TV.
﻿
Posted by jon at 11:50 PM 7 comments:

Ho, ho, ho and a bottle of rum, everybody! Merry Holidays and a happy breakfast of champions to all!

It's been an odd-numbered year for the Tolmans in 2013, and as tradition dictates, we now present to you a brief summary of our goings on during the past calendar.
Nora Tolman is a sweet, gentle, kind-hearted soul, as long as no one has told her to do anything in the last couple hours. One weekend in August, she was making a bed for her My Little Ponies and singing a song about how much she loves her family, when Becky told her that she'd have to have her hair put up in piggy tails.  Nora promptly stabbed Becky in the neck with a crochet hook and bit off the finger of a state senator that happened to be walking by.  Luckily, during the court proceedings, she also scowled at the judge with sufficient vehemence to get the charges dismissed.
Lucy is turning out to be vastly intelligent and remarkably creative, though she seems to have inherited her father's attention span.  This was plainly evident last Thursday when she penned a dissertation about the political motivations behind Tolstoy's collective works, but upon reading said dissertation, we found that she'd only read the first page of "Green Eggs and Ham."
Samantha is in the third grade.  We sometimes worry that she might be bored with the banality of traditional education.  She's just good at everything.  She's like Gwyneth Paltrow, except that Gwyneth Paltrow was in that awful movie about flight attendants.
Becky and Jon bought a house, but to be more accurate, they bought Becky's parents' house and now snuggle up together every night in Becky's parents' old room. They promptly ripped out the floors and a couple of walls to make it feel less like the home where Becky had her diapers changed, but it's definitely still the house where Becky had her diapers changed.  You can tell by the old people who live in this neighborhood who look at Becky with a mixture of suspicion and adoration. "Aww, isn't that? Oh, wait, did they? Why would would they? What are they doing?"
Speaking of "what are they doing?", Becky and Jon have also started the process of adopting a baby.  It turns out that parenting was getting a little too easy and the amount of money in the bank was getting just a little too consistent, so changes had to be made post-haste.  If anyone happens to know of a particular little life that would do well with three doting older sisters, feel free to communicate.
So that's about it.
May you all have more of what you want and less of what you don't.
-The Tolmans 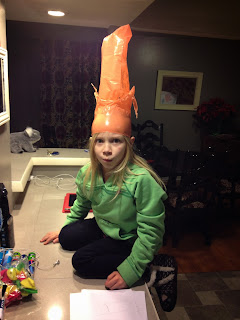 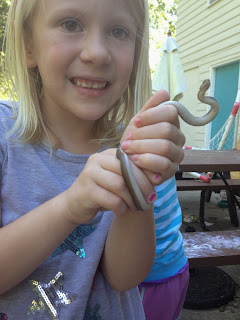 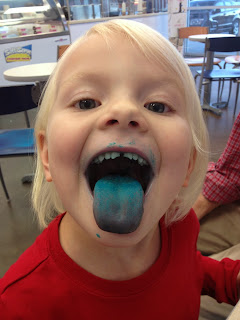 I knew there was reason we had gone through that training as a toddler.

It's interesting how technology both evolves and devolves communnication.
Blogging has grown cumbersome. It takes too long to sit down and compose something for ten minutes. It's boring. Facebook and Twitter have become the new cultural standards for our attention spans. I fully admit that when I scan down my Facebook feed, if someone has written something longer than a paragraph, I will usually skip it.
This blog post has gone on for an entire paragraph without a picture, so it's likely that anytone who might have happened upon it by accident has probably already skipped down to the picture of a llama and won't read this paragraph unless the llama interests them enough to go back and figure out what's going on.
I don't actually know why I'm talking about this when I should be telling the 4 people that might seek out this blog about our family.
Samantha is steadily growing into a very poular girl. I worry sometimes if being smart is as important to her as being liked. She's both.
Lucy is going through a phase that involves passionate crying whever anything doesn't go her way. She's a model student according to her teachers, but her complete inability to cope with change has us wondering whether or not she might have some sort of attention deficit.
Nora is 4. She sometimes gets a crazed look in her eyes that shows us what her Grandma Sue will look like when dementia takes hold.
As promised: 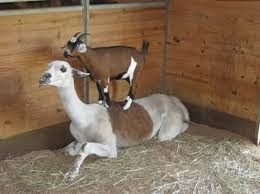 Well, we're at this lovely place in our lives. We have three lovely girls. All of them can talk, even if they occasionally give us substantial sass, we know what they're saying. They all poop where they're supposed to poop. Our youngest is learning to read and she'll be in kindergarten next year. Everything is getting… settled.
So we're going to adopt a baby.  It's ridiculous.  We're almost done with our home study which has involved a mountain of paperwork, four very pleasant but long interviews, and some money and we're another step closer to bringing another child into our family.
The girls are excited about it.  They're aware that it might not happen for a while. I've already gotten some comments from people at work like, "You already have three kids. Why do you think you need another one?" I guess we don't "need" another one, but we want another one. We think that our home is a decent place for people to grow up. We both feel like it's something we should do, even though it's expensive and illogical.

So there it is.
Here's the picture we gave to the home study lady that says, "Hey, what cute little adoptive couple!" 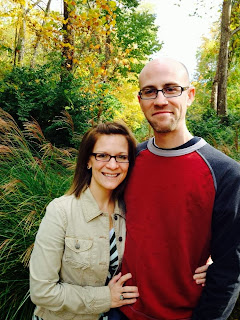 And here's a picture of a cheese ball. 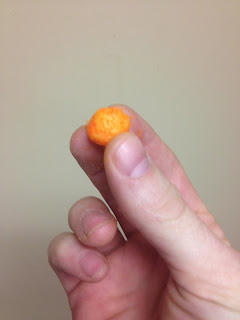 And here's Lucy losing a tooth.

Tolman Quote of the Week

"Hey! Quit poking me in the head and dancing! Eat your food."